Long before it happened, God promised Abraham that he would be ‘father of many nations’. Though they were together many years, he and his wife never conceived a child. Finally, Sarah lost patience and suggested Abraham have a child with her servant Hagar. According to custom, the child would be counted as a legal heir and carry the family name.

God had specifically said that Abraham and Sarah would have a child, but as we all often do, they rationalized a short-cut.

In life, many times, you can be praying and believing for something to happen and before it happens in the ‘God’s best’ way, Ishmael shows up.

He’s always fairly easy to make happen, you can control the timing of it and there is ALWAYS a moral compromise. Not just the impatience, not just the doubt that God will keep His promise, something culturally acceptable, but morally wrong or Scripturally wrong.

The last few years, I have been praying, studying the Bible and looking at how to prepare for the Great Harvest that has been prophesied for the end of this age. Three fathers of faith - Smith Wigglesworth, Lester Sumrall and Kenneth E Hagin were highlighted to me. I put their prophecies on this page as a video and there is a transcript of Brother Hagin’s word from 1963.  https://faithtrainers.com/3Prophets

In it, he mentions the spread of racism and communism throughout the United States as a blackness - spiritual darkness, evil and not just on the surface, deeply influencing our nation.

We adopted civil rights reforms shortly after that and this was a ‘political solution’ but not a heart change.

Over the years more laws have been passed and racial discrimination has measurably improved. People are penalized and punished for violating people’s rights or denying them opportunity for reasons of skin color, gender and marital status. Discrimination in school admissions, real estate zoning, voting and bank lending have been addressed - with measurable improvements.

Still - not a heart change.

In the last two decades, injustice has been found in police brutality, racial profiling and unjustly imprisoning black men for street drugs that in a more expensive form white people aren’t prosecuted as harshly or imprisoned as long. Conditions in prison have been spotlighted as well.

There have been substantial improvements in the incidences of police brutality and racial profiling and unjust imprisonment. Police overstepping bounds or unjustly harming or killing criminals have been increasingly investigated and prosecuted if what they did was corrupt or criminal.

The First Step Act, passed last year, improved prison conditions and it addressed the unfair sentencing and gave prisoners more resources for case review and early release. Thousands of prisoners have already benefitted from this being in force. Still not a heart change - but large and measurable progress to what is fair and just.

(There are many proofs of everything I’m citing here, but that’s not the goal today.)

Many people have been stirred about this lately and because we all WANT there to be no racism and communism, a plan was set in place to help.

There have been community organizers (agitation agents) promoting God hating, marxist groups and fomenting anger and rioting for the last 10 years. From how the media tells the story and hides the complex reality and dismisses the major improvements, things are getting worse. They aren’t.

When the video of George Floyd being killed was seen and mourned over. The political operatives seeking to create chaos, unrest and lawlessness were ready.

They created an attractive and memorable slogan - Black Lives Matter. Who could disagree? Even if they try to explain the larger view of everyone mattering - they were easily bullied and shamed.

Thousands of churches and ministries came on board with the posting of a black square on social media, sermons, lamentations and increased adoption of ’social justice’ policies and outreaches and programs. All conveniently packaged and set up with a nice veneer of Bible verses, displays of emotion and lots and lots and lots of listening, reading, empathizing and feeling the pain of an intersectional minded generation of rebellious, ignorant, entitled, victims.

A tempting, perhaps ready made crowd of people who can fill your church building demanding to be respected, listened to, coddled and nurtured in their self pity and giant mess of life choices that were godless, selfish, impulsive, decadent, perverse and angry. They’ve been rewarded based on how many categories of ‘victimhood’ they fill.

Do they want change, the love of God, peace, freedom from addictions, guilt and shame?
Some do.

Will they give up indulging their immediate desires, being drunk and high, sexual perversions and … victim status? Will they lay down their lifestyle and repent? Will they forgive and eliminate all the victim points?

Discipleship, accountability, study of the Bible and prayer at levels that correct, inform and alter your life are needed.

How many, if you do tell them things that the Bible teaches very clearly are wrong, will use their skills to ruin people and your ‘brand’?

Does that sound like trouble? Ishmael is a pile of trouble that doesn’t quit.

Am I saying don’t go after racism and communism? Telling you not to reach out? Not at all.

I am saying this. If you let the very well funded, very polished community organizers - some of whom may already be attending your church or contacting your church - give you a way to evaluate your church’s diversity, your staff’s diversity ratios and helping you discover ‘unconscious bias’ and privilege - will you take it?

I’m not going to go into it in this post. But examine what we should always examine.

Is the blood of Jesus and the full forgiveness of sin front and center?

Is a transformed life through being forgiven and reconciled to God and empowered by the Holy Spirit to live a clean, victorious life, front and center?

Everyone is the same? No one has privilege and honor unless they are set in a position of leadership as a faithful, mature, person who serves God?

Everyone can go together to the Bible and in prayer on EQUAL terms and address any life issue?

No ‘its a black thing’, no 'you don’t have a college degree', no ‘unless you’ve walked in my shoes, you can’t speak about this’, no ‘we’re against abortion, but it’s complicated and no talking about it’?

No ‘doing the work’ because Jesus DID the work?
If you do have wrong thinking or ignorance - maybe even an expression of what sounds racist - is that forgivable? Immediately and permanently?

Are there tests for bias, privilege, ‘wrong thinking’ and understanding of diversity that someone has to pass that aren’t from the Bible?

We must have heart change. Forgiveness.

We must have life change. Transformation through the work of the Holy Spirit.

We must have a changed, renewed mind. From study and meditation of the Bible. The Bible is our first authority and needs to be used to prove everything out with two or three in-context witnesses.

THEN to address the culture, racism and communism and false religions and godlessness, we get the ‘hands of fire’ prophesied by Brother Hagin. When people see that we aren’t just operating with words and philosophies, but with the power and demonstration of the most High God and the Lord Jesus Christ - they can be freed.

Ishmael may be super popular now, but if you let that in your church - it’s likely the end of it.

Your top people are not racist and educating them that they are will drive them out.

Your baby Christians - if they have the love of God in their hearts - are not racist and you will bring false guilt, condemnation and sadness into their life. Wounding your lambs.

Hearing from you that you were secretly racist if they’re colorized? How cruel! (And the sick thing is… you’re NOT.)

Your young people looked up to you… and observed you in word and action serving everyone with no racism and with kindness. Now they hear you confessing that you had this evil in you but didn’t know it? You may destroy their faith. 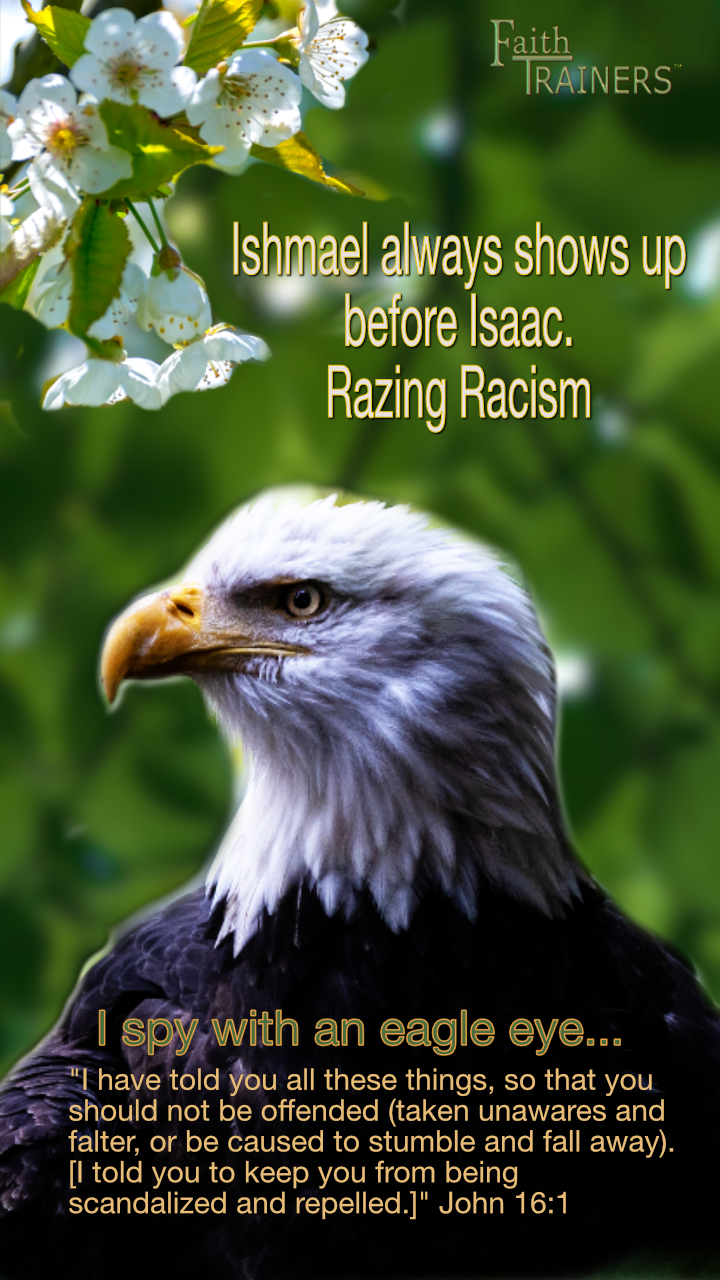